After the Launch of Chandrayan-2 ,ISRO again Comes into the News. In the very Low allocated cost of ₹978 crore, ISRO is ready to Disturbs the Space Industry Market.

We already heard & know about the two most biggest departments of the world which works on the activities related to space.

“What are they ?” ISRO & NASA ? Yes, as they both gives there best cooperation to the world.

1: Chairman of ISRO has announced that it will have a separate space  station by 2030.

2: There will be a smaller module, which would be mainly used to carry out micro gravity experiments.

3: After Chandryan-2 ISRO’s upcoming mission will be the interplanetary mission to mars, Venus, the sun.

1: NASA is planning to launch Mars exploration (to provide possibility of life on mars) program by July/august 2020.

2: It is creating, testing & flying cutting-edge technologies for human and robotic exploration.

3: James Webb telescope (will help to observe the objects that are covered).

Recent Achievement of  ISRO is Chandrayan 2 Launch, Let’s have a Highlight of this mission:

Chandrayan-2, launched on July 22 by India’s most powerful rocket GSLV MKIII-M1 had entered the lunar transfer trajectory on August 14, leaving earth orbital. It comprise an orbiter lander (Vikram) , named after the father of Indian space research programmer Dr.Vikram A. Sarabhai & Rover. It is launched by ISRO. It is the second lunar bound orbit maneuver performed it’s schedule successfully on August 21,2019.

Next lunar bond orbit maneuver is scheduled on August 28,2019. It was launched on 14 July,2019. ISRO mission is comprising a orbiter & a soft lander carrying a Rover. It’s primary objective is to demonstrate the ability to soft land on the lunar surface of moon. Now the lander will separate from the orbiter on 2 Sep,2019 & will enter into a 100km x 30km orbit around the moon.

The Team Behind this Mission:

Major Achievements of Both–

2. Chandrayan (the first space mission to the moon)

3. Reaching to the mars.

ISRO,(“Indian space research organization”)was build under the support of the Department of space (DOS)to develop space related programes and technologies. It was started on 15 August,1969 by Vikram Sarbhai(first chairman of ISRO). ISRO has developed to satellite launch vehicles, PSLV & GSLV to place INSAT & IRS satellites. It’s headquarters and satellite centers are located Bangalore .

NASA,(“The national aeronautics & space administration”) Is an independent agency of the united states federal gov. It was established on 29 July,1958 by Dwight David Eisenhower . The space era of NASA was started in 1957 with the launch of Soviet

satellite “sputnik” . It’s headquarters are located at Washington D.C. It takes care about all space center.

After All above discussion, we can say ISRO is performing better if we compare with the resources that both agencies are getting.

Here we have some data : Country vise  Comparison Of  Space Exploration Budget & there Agencies- 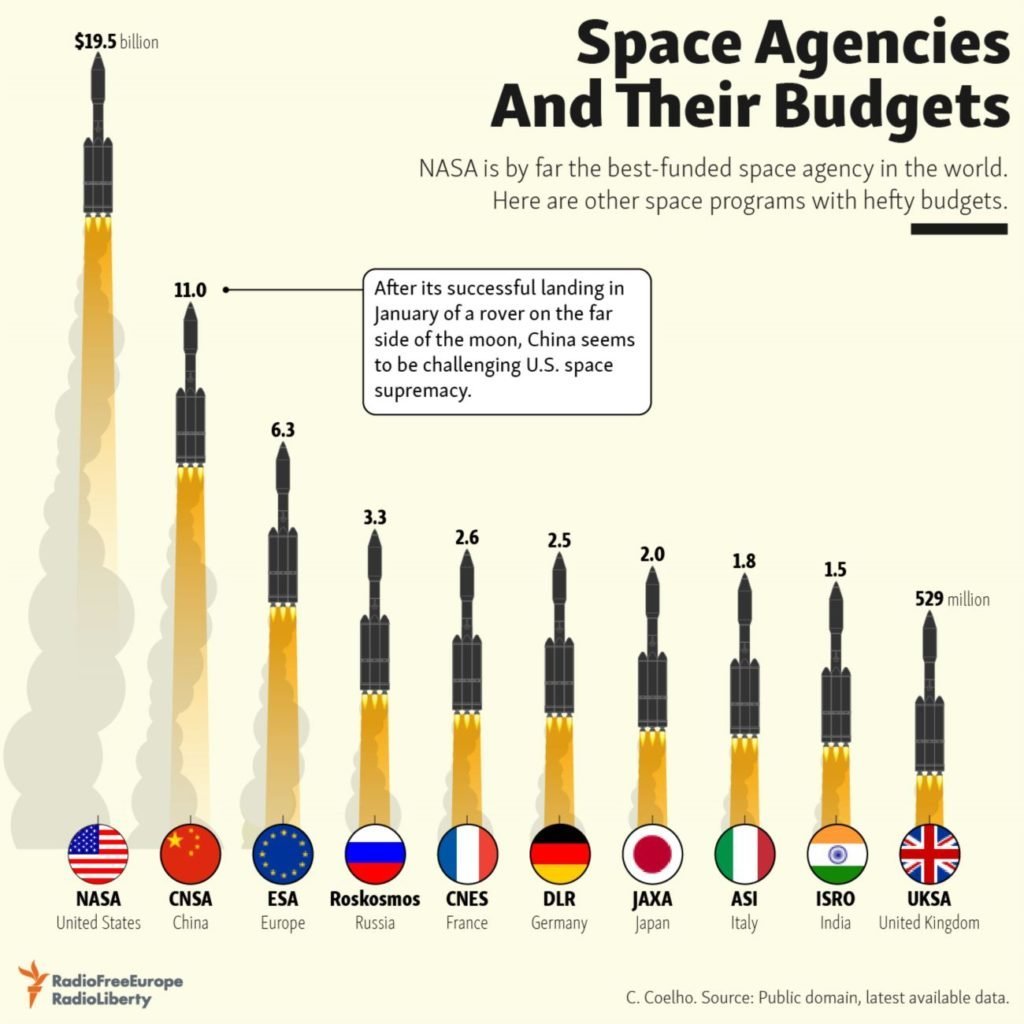 The world actually woke up to ISRO’s tech prowess in 2013, when it succeeded with the Mars Orbiter Mission (MOM) — the Mangalyaan. What was path-breaking about MOM was not just the fact that it was the first successful attempt to send a probe to the red planet, but the mission’s amazing cost — it was achieved at $74 million, which is one-ninth of the $672 million spent by NASA on its Mars mission. It was even cheaper than even the Hollywood blockbuster Gravity, the Sandra Bullock and George Clooney starrer that cost $100 million.

4 of World’s Most Successful Athletes and Their Watches