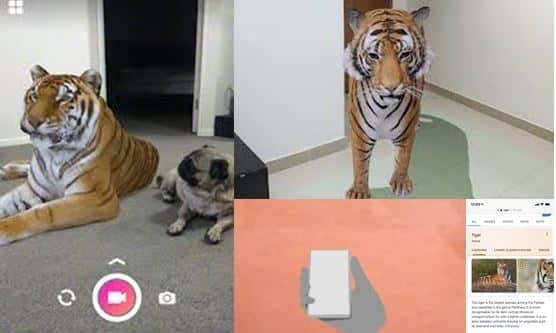 Google 3D Animal Hologram New feature || Add to your surround ,Google has released an unexpected feature, this feature lets the users create and put 3D holograms of any wild animal of their choice. Yes, prototypes like these have existed in the past, but it has been made so big for the first time.

How do you watch animals in 3d on Google or How you can add an animal hologram ?

Step 1: Search on google for any animal, like ‘Tiger’.

Step 3: click on the next option  ‘view in your space’.

Step 5: so here is your Tiger, you can resize the tiger and  hear it roar.

Here some google 3d animals list that are available –

Also Read: 5 steps to prevent yourself from corona virus (COVID-19)

To view the animals in 3D a person needs to give the Google app some basic access such as ‘Access to use the camera and videos,’ ‘Access to location,’ and more. One can easily give access by clicking ‘Allow’ whenever the pop-up appears while using the Google View in 3D feature. The other way to use the feature is by doing it manually.

1. Open the ‘Settings’ app on your smartphone

5. Switch on all the permissions you wish to give the App to effectively use ‘Google View in 3D feature’

‘Google an animal in 3D’  Type an animal into Google (it’s worked for shark, bear, lion, horse, and dog so far) then scroll down until you see ‘View in 3D’. Lots of fun for the family!” says an elated Twitter user, who has discovered the joy of viewing any animal in 3D version, thanks to the 3D hologram technology. All that you need to experience the same is a smartphone that is AR-enabled. You will have to download the most advanced operating system for the benefit.

“This one’s for the kids if you didn’t already know. Type an animal into Google-like ‘tiger ‘lion’ or ‘penguin’ then scroll down to where it says ‘view in 3d’ allow Google to access ur camera… Then it appears in your room through your phone,” says another Twitter user.

VPN for Windows, Best VPN Service Around The World

How To Get Your First 100 Subs With Video Content Creation