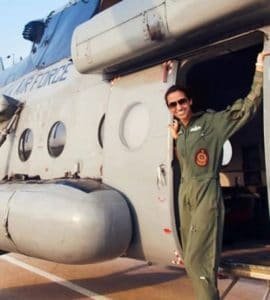 Women have been slowly, but surely breaking the glass ceiling & emerging on top.

Women’s are now promoted to do any jobs in any field, Indian air force is one of them. According to the recent news a women has captured the place of a first female flight commander.

Here, Shaliza Dhami wing commander of Indian air force ,She is the first female officers in the country to become the first women flight commander of a flying unit.

What is Flight commander ?

These are some of the leaders who are directly or indirectly included in defending or serving the nation.

Shaliza Dhami, was born in Ludhiana of Punjab. Her parents had government jobs. They always dreamt to see her as a pilot since she was in 9th grade. She took her first solo flight in 2003 in Hyderabad, on the HPT-32 Deepak. She’s a successful mother of a nine year old child.

On Monday, 26 August 2019, she took over the Chetek helicopter unit at the Hindon air base in Ghaziabad, Uttar Pradesh. She will be operating a light utility helicopter which can accommodate six passengers.

Wing commander Dhami, is serving for 15 years & now has been flying choppers. She became the first women flying instructor of the air force and also the first women officer to get permanent commission of the flying branch.

Here, between all the news, Nitin Welde felt proud to his student who became his pride. Nitin weld is a retired group captain from Indian air force. He has served in North East India, Sachin glacier & actively participated in the kargil War.

Indian air force registered a historic event when it got its first female flight commander, Shaliza Dhami with this,  women Have logged a milestone & proved that “women, no less than men”.