Full form of CRDI is Common Rail Direct Injection, in this Diesel fuel is directly injected into the cylinders via single Common line. these common line are supplying fuel to each injectors. 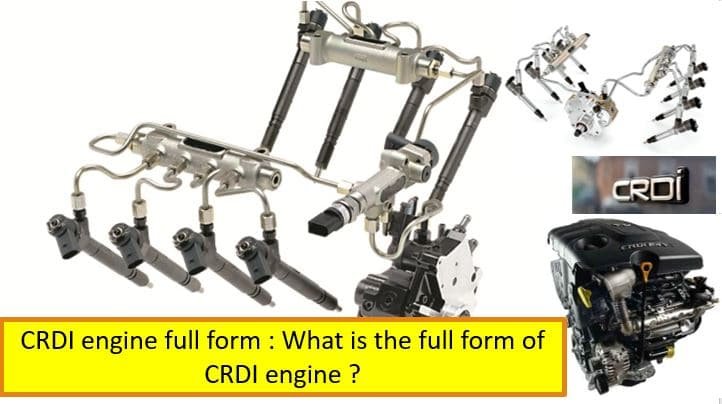 How does a CRDI engine work?

Pressure pump supplies the pressurized fuel to rail. function of rail is to distribute fuel to individual injector.

The engine’s electronic timing regulates injection pressure according to engine speed and load. The electronic control unit (ECU) modifies injection pressure precisely and as needed, based on data obtained from sensors on the cam and crankshafts. In other words, compression and injection occur independently of each other. This technique allows fuel to be injected as needed, saving fuel and lowering emissions.

The common rail system prototype was developed in the late 1960s by Robert Huber of Switzerland and the technology further developed by Dr. Marco Ganser at the Swiss Federal Institute of Technology in Zurich, later of Ganser-Hydromag AG (est.1995) in Oberägeri. The first successful usage in a production vehicle began in Japan by the mid-1990s. Modern common rail systems, whilst working on the same principle, are governed by an engine control unit (ECU) which opens each injector electronically rather than mechanically. This was extensively prototyped in the 1990s with collaboration between Magneti Marelli, Centro Ricerche Fiat and Elasis. The first passenger car that used the common rail system was the 1997 model Alfa Romeo 156 2.4 JTD, and later on that same year Mercedes-Benz C 220 CDI.

Common rail engines have been used in marine and locomotive applications for some time. The Cooper-Bessemer GN-8 (circa 1942) is an example of a hydraulically operated common rail diesel engine, also known as a modified common rail. Vickers used common rail systems in submarine engines circa 1916. Early engines had a pair of timing cams, one for ahead running and one for astern. Later engines had two injectors per cylinder, and the final series of constant-pressure turbocharged engines were fitted with four injectors per cylinder. This system was used for the injection of both diesel oil and heavy fuel oil (600cSt heated to a temperature of approximately 130 °C). The common rail system is suitable for all types of road cars with diesel engines, ranging from city cars such as the Fiat Nuova Panda to executive cars such as the Audi A6.

What is the advantage of CRDI engine?

Does CRDI have Turbo?

In most of the cases CRDI Engines have Turbo charger, basically it is used to enhance the engine performance in less fuel requirement.

Is Crdi only for diesel?

Hope you like this article Full form of CRDI . find useful detail in our article present in this blog so that you can learn more. please comment below for any suggestion or Query. if you want to learn more about vehicle design we are teaching you for free.